Watching a BBC programme on British landscape painting at the weekend I came across a new word. Well, new to me...."Stoffage".

Rather like 'en plein air' these things sound much grander in French, don't they?

- or should that be 'en francais'?

Anyway, it turns out 'stoff-ah -je' is what landscape painters call figures in a landscape going about their ordinary daily business - usually that is to say peasants dressed in peasant garb and doing peasant stuff - as opposed to symbolising Bacchus and Ariadne, or cheering on a bare-chested Liberty over the barricades of the Bastille.

But anyone who has ever attempted to paint a market-place or a street scene will know how vitally important yet just how tricky 'stoffage' can be. Urban landscapes especially, unless striving for that melancholic 'Sunday morning' atmosphere, cry out for people to populate them. Yet that can often be the demise of a carefully established space and the ruination of an otherwise satisfactory painting.

Which brings me to one of the Art in the Open workshops to be held on Monday 1st August, as UK-based artist, Michael Richardson will show you how to build figures into your compositions so they look as if they belong there and could move about there. Richardson will explain how to relate your figures to the space and to each other so they appear natural and interesting. No more 'carrots' or cut-outs, giants or midgets.

Illustrating his topic with reference to his own confident compositions of London or Venice, busy train stations or Trafalgar Square, Michael will share expert tips on how to suggest figures and crowds to make them appear natural and convincing. 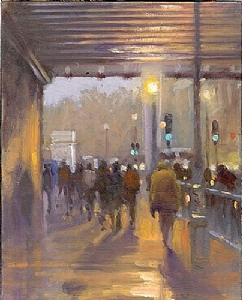 There are 3 workshops available:

John Dinan 'How to create a great focal point'.

Michael Richardson 'Figures in the Landscape'.

Each workshop costs €15 and places can shortly be reserved online at www.artintheopen.org or by posting a cheque payable to 'Art in the Open' accompanied by the completed brochure form to:

(Above)  "Under Hungerford Bridge" by Michael Richardson.

You need to be a member of Plein Eire to add comments!

Another of the 3 workshops will be given by Michael Drury of Santa Barbara in California.

This workshop will be about working larger outdoors.

"Anything over 20"x30" is going bigger, and I make paintings up to 24"x40" in Connemara, and 36''x 60'' regularly here in the USA.
It requires using big brushes, such as 2 or 3 inch sash brushes, standing at the easel, which is a whole other story, and painting with your whole body, rather than just your wrist.

Its not for everyone, but an important part of what I do."

A keen surfer, when Drury is not riding the breakers of Big Sur, California, or the Atlantic coast of Ireland, he is busy painting them.

"I will demonstrate both how I paint and what I paint with to make big paintings oudoors.

I'd love to go back to Benwee Head and tackle it on a bigger canvas and when I come back to Ireland next year, I will be gearing up for 3'x5' paintings. "

This workshop is about pushing the boundaries of your painting, taking risks and getting out of your comfort zone. So wax down your boards for a  larger-than-life painting experience on Monday 1st August at 2pm.

Never heard of “Stoffage” either. I think it’s german though from “Stoff” meaning material or tissue. The ”-age” at the end is strange for german so it could be a word the French borrowed from german and added the ”-age”.

“Stoff” in french is “étoff/e” and I can’t find  “étoffage” anywhere but “étoffer” does mean expanding or fleshing out.

Seems we can’t blame the Americans this time on a re-importation.